Home
/
News
/
Revisiting the Past as We Imagine the Future: Reflecting on the 2016 Marathon Read

Revisiting the Past as We Imagine the Future: Reflecting on the 2016 Marathon Read 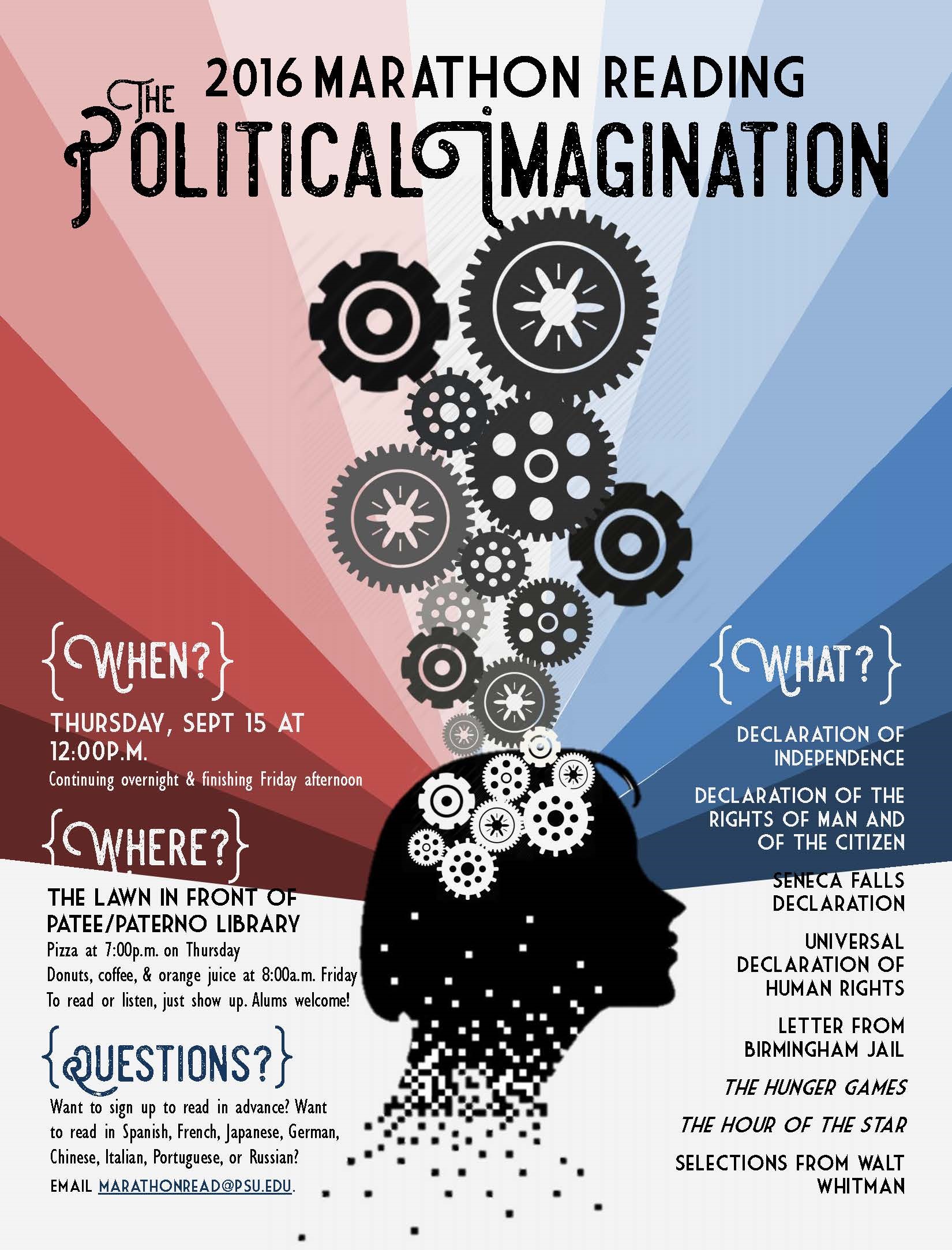 Beginning at noon on September 15 and continuing for 24 hours, Penn State students, faculty, and community members came together for the fifth annual Marathon Read at Penn State. Participants stood beneath a tent in front of Pattee/Paterno library, letting their voices emanate with the words of both political documents and contemporary fictional texts that reflect on past, present, and potential future political moments. This year's theme, "The Political Imagination," asked readers and listeners to consider the potential of our minds to envision new ways of approaching both personal and national politics. The stirring readings of historic political documents like Martin Luther King Jr.'s "Letter from Birmingham Jail," the Declaration of Independence, Abraham Lincoln's Second Inaugural Address, and the Seneca Falls Declaration suggested to all in attendance how we might discover how politics mattered in the past in order to find our way forward now. 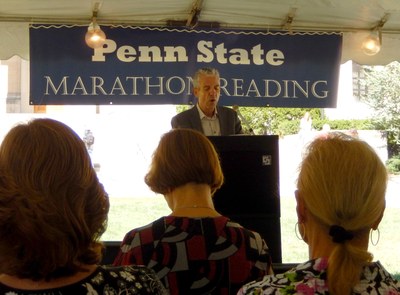 As members of the community read segments aloud in timed increments, audience members felt the rhetorical impact of these powerful documents. Joe Bueter, a lecturer and digital education specialist at Penn State who read from The Hunger Games, remarked that "engaging with the political imagination is probably always important, but slowing down and hearing some of the foundational texts and new texts produced for/in a democratic society is especially important. Subtlety is often lost, unless we sit down and read and hear fuller, more considerately composed ideas." The Marathon Read offered a unique forum akin to how an ideal democratic state might operate: the assembled community listened carefully to one another, allowing each person's voice to be heard in turn. Paired with the eloquent power of the texts themselves, listeners could easily open their minds to potent possibilities of the political imagination. 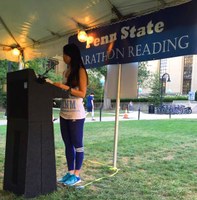 Undergraduate science major Jessica Saganowich reflected that the political imagination, for her, means "using creative ways of thinking, expressing, and communicating to describe civic and community issues." Her definition would seem to coincide with both Bueter's articulation and with the organizing principle of this year's Marathon Read: By engaging with inspiring political statements of all kinds—historical, fictional, and poetic—we might be inspired to address the pressing political issues of our own moment.

Indeed, amidst a controversial 58th presidential election campaign, as the United States faces the possibility of having either an entertainer/businessman or its first female as president, we are in the process of redefining the political spectrum set in place by our forefathers centuries ago. Katie Warczak, a master’s student in the English department, suggested that each political moment, including our own, is rife with revolutionary potential and possibility. “The term political imagination conveys a sense of 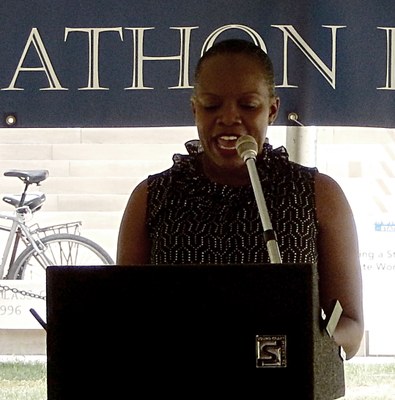 political possibility,” Warczak stated, “in terms of a contrast between what currently exists and what could be. In other words, we, whether politicians or average citizens, imagine how we can get to a specific place, such as a country with greater racial or gender equality, for example, through politics.”  Thus it was especially poignant for Warczak and others to hear documents like King’s “Letter from Birmingham Jail” in the context of present-day political movements like Black Lives Matter.  Similarly, listening to the Seneca Falls Declaration of Sentiments of 1848, which addressed the disenfranchisement and social degradation of women, seemed timelier than ever in a campaign where concerns about gender and equality have been paramount.

Featured on the slate of texts for the Marathon Read, Suzanne Collins's enormously popular novel The Hunger Games tells the story of Katiss Everdeen, a powerful female fighting political battles. Collins provided listeners with a look into a dark potential future of politics that, some have argued, may already exist now. Katniss battles a totalitarian and unyielding governmental structure devoid of concern for the political inequalities that result in debilitating divisions of class. The text that followed, The Hour of the Star, similarly features political class divisions under the control of the Brazilian government. Expanding the Marathon Read's scope beyond the United States' borders, this novel depicts struggles between the impoverished and the wealthy as well as between rural and urban communities. 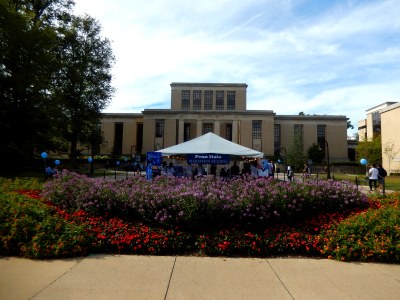 Both texts spoke powerfully to the issue of poverty and, in turn, resonated with heated debates today about income inequality and the impoverished condition of our democratic politics. Yet both novels also suggest the possibility for change. Upon hearing these popular works read aloud, Sangowich remarked that “The Hunger Games resonated the most because it shows how the strength of one individual can make such an impact on society.” Likewise, the goal of this year’s Marathon Read was to stimulate people into thinking about imaginative political futures by engaging aurally and orally with texts like these.  “A lot of work remains to be done in a wide variety of areas,” Warczak acknowledged, “but as long as we are able to imagine a different world, the potential for change at least exists.”

Fittingly, then, the event closed with passages from Walt Whitman's Leaves of Grass (1860), which sings the praises of a past, present, and future America in the comingling of the literary and political imagination:

O voices of greater orators! I pause—I listen for you!
O you States! Cities! defiant of all outside authority! I spring at once into your arms! You I most love!
O you grand Presidentiads! I wait for you!
New history! New heroes! I project you!
Visions of poets! only you really last! O sweep on! sweep on!
O Death! O you striding there! O I cannot yet!
O heights! O infinitely too swift and dizzy yet!
O purged lumine! you threaten me more than I can stand!
O present! I return while yet I may to you!
O poets to come, I depend on you!