Home
/
Programs and Series
/
C19: The Society of Nineteenth-Century Americanists

C19: The Society of Nineteenth-Century Americanists

The first academic organization dedicated to nineteenth-century American literary studies, C19 was co-founded by CALS faculty members Hester Blum, Chris Castiglia, and Sean Goudie, who currently serve on the C19 Advisory Board.  CALS hosted the society’s inaugural conference at Penn State in 2010 and served as a co-sponsor of the second and third biennial conferences held at the University of California, Berkeley (2012) and the University of North Carolina, Chapel Hill (2014).

As founding organization of C19, CALS was pleased to host the fourth biennial conference for C19.  The conference took place at the Nittany Lion Inn at Penn State on March 17-20, 2016.  The 2016 theme, “Unsettling,” challenged the notion of a defined field of study, seeking instead to explore approaches, methodologies, geographies, languages and texts that disturb and agitate American literary, historical and cultural studies.

CALS also co-sponsored C19’s fifth biennial conference held on March 22-25, 2018, in Albuquerque, NM. CALS faculty member Hester Blum, President of C19, presided over the conference and was instrumental in shaping the conference theme, “Climate.” And finally, the sixth and most recent biennial conference, focused on the theme of “Dissent,” saw a return to Penn State and CALS—albeit virtually. Read our preview of how this virtual conference, held over the weekends of October 16-18 + 23-25, 2020, came together.

The seventh biennial conference, centering on the theme of “Reconstructions,” was held on March 31st to April 2nd, 2022, in Coral Gables, FL. CALS was proud to sponsor the conference’s “Closing Reception.”

More information about the organization and its conferences can be found on the C19 website.  C19 is also home to J19: the Journal of Nineteenth-Century Americanists, for which Chris Castiglia served as founding Co-Editor. 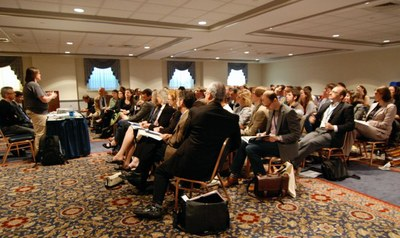 Right, Trish Loughran addresses a packed room on the morning of the first day of C19's inaugural conference, hosted by CALS at Penn State in 2010.