Racial Justice Protests and the Media: Unprecedented and Routine Violence 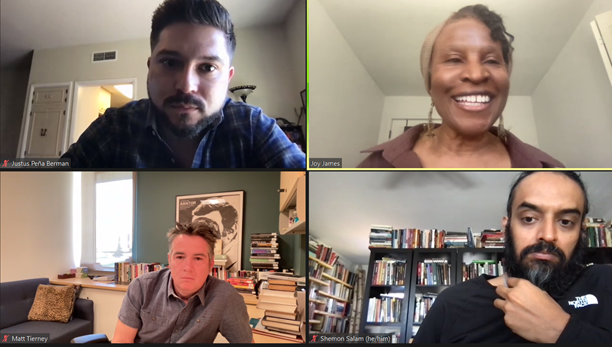 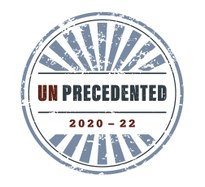 “Unprecedented” is a word employed frequently by media, government officials, and lay persons alike to describe the phenomena surrounding the COVID-19 pandemic and its effects. Inspired by recent events and the rhetoric used to account for them, the “Unprecedented” series of 1-hour webinars will feature presentations and discussion by leading scholars, writers, and activists focused on better and less well known developments in American literature and culture (and American literary and cultural studies) that might be, and in some cases have been, described as “unprecedented.”

No data was found

Racial Justice Protests and the Media: Unprecedented and Routine Violence

In May 2020, George Floyd was murdered by police officer Derek Chauvin in yet another instance of state violence against Black people. In response to Floyd’s murder, millions of people experiencing compounded precarity due to the COVID-19 pandemic took to the streets in protest, a mass movement that became known as the George Floyd Uprising. Anticipating the two-year anniversary of Floyd’s murder, this webinar examines the relationship between routine and unprecedented violence and the role of media during and after the George Floyd Uprising. Panelists will suggest how we might seize on that analysis to advance the fight for Black lives and to prepare for future mass rebellions.

“Now What?” What Now?: Approaching a Precarious Present

The February 2021 issue of Harper’s Magazine, titled “Now What?”, includes a special section devoted to speculation on multiple facets of “Life After Trump.” As with commentary speculating about a COVID-19 world, characterizing the post-Trump era as an unprecedented “now” presumes temporal clarity, including a clearly demarcated present. Such characterizations thus greatly simplify our contemporary moment, framing complex forces—like Trumpist politics and pandemic repercussions—according to a simple before-and-after logic. How can we better account for the full complexity of our precarious present? Bringing together three scholars whose work surveys this terrain, this webinar considers what it means to direct critical attention to “now.”

Sizing Up The Chair

In the opening episode of Netflix’s recently launched series The Chair, Ji-Yoon Kim, played by Sandra Oh, delivers her first speech to her colleagues as the first woman, and first woman of color, to serve as Chair of the Department of English at Pembroke University: “I’m not gonna sugarcoat this. We are in a dire crisis. In these unprecedented times, we have to prove that what we do in the classroom . . . is more important than ever and has value to the public good.”  Hailed by The Atlantic as “Netflix’s Best Drama in Years,” The Chair has elicited much discussion from viewers and critics, and academics and non-academics, about its treatment of a range of issues including the crisis in the humanities, freedom of speech, departmental politics and culture, and matters related to diversity, equity, and inclusion. The panelists on this webinar tell us what the series gets right and wrong and share what they perceive to be the series’ achievements and contributions.

The Role of the Humanities in Addressing Vaccine Hesitancy

COVID-19 remains an ongoing public health threat in the United States, despite widespread availability of effective vaccines. The anti-vaccination movement has been characterized as a disingenuous partisan ploy underwritten by far-right politicians and media outlets, but those who refuse vaccination are not all willfully ignorant or dangerously misinformed—that is, the causes of vaccine hesitancy are multifarious and complex. Beginning from the premise that the humanities are uniquely equipped to confront such complicated social, political, and ethical matters, this webinar will explore the causes of, and potential solutions to, vaccine hesitancy from a variety of disciplinary (and interdisciplinary) perspectives.

“Grown Deep Like the Rivers”: The Black Lives Matter Movement(s) from Langston Hughes to the Present

2021 marks the centennial anniversary of Langston Hughes publishing one of his best known poems, “The Negro Speaks of Rivers.” The poem was a signature poem of the Harlem Renaissance and written by a teenage Hughes as he was crossing the Mississippi River on his way to see his father in Mexico. It was Hughes’ first poem to be published in The Crisis, the NAACP’s official magazine edited by W. E. B. Du Bois. Like the magazine it was published in, “The Negro Speaks of Rivers” has been a touchstone for generations owing to its themes of race pride, historic and diasporic consciousness, and eloquent dignity in the face of centuries-old patterns of slavery and racial violence. Panelists will remark upon the importance of Hughes and his poem and suggest how we might connect both to artistic and literary productions shaping, and shaped by, the Black Lives Matter movement(s) in our own time, all the while pointing out how one or the other movement may (or may not) be unprecedented after all.

American Literary Studies Beyond the Brink

The Chronicle Review introduced their recent collection “Endgame: Can literary studies survive?” with the bold statement, “The academic study of literature is no longer on the verge of field collapse. It’s in the midst of it.” The sentiments here expressed seem far less bold and more obvious in the midst of the unfolding effects COVID-19 is having on employment and funding in academia generally and American literary studies in particular. Various interrelated forces could be and have been identified as having contributed to this moment, such as changes in university funding sources, privatization of research, externalization of revenue, the increasing debt burden for students, threats to academic freedom, the shifting demands of professionalization, and the decreasing public valuation of humanistic study. This webinar approaches the demise of the profession by considering again what it means to continue in this work now, as well as the whys and hows of studying American literature and culture at this moment. What shape might American literary and cultural studies take in order to contest developments that have left the discipline on the brink of collapse?

Getting Personal: American Women Poets and the Autobiographical Lyric

When it was announced that Jewish-American poet Louise Gluck had been awarded the 2020 Nobel Prize for Literature, Gluck became the first woman poet from the United States to win the prestigious honor. Using this “unprecedented” announcement as a launch point, this webinar features three women poets whose work, like Gluck’s own, has alternately been described as “confessional” and “personal.” The “confessional” school of poetry originated in the United States in the mid-twentieth-century, and important poets such as Sylvia Plath, Adrienne Rich, and Anne Sexton have been associated with that school. Yet Gluck and her readers have argued that her lyrics are more than merely “confessional” in mode, though they are undeniably personal and autobiographical. Likewise, the three women poets serving on this webinar panel are renowned for their personal lyrics that are more than merely confessional. Each panelist will address the significance of Gluck’s being named the winner of the Nobel Prize for Literature and share their approaches to the “confessional,” “personal,” and/or autobiographical school of poetry.

For the first time in its publication history, The New England Journal of Medicine endorsed a candidate during the recent U.S. presidential election. While the journal's editorial was heralded as an unprecedented move, the politicization of science has always been a concerted point of inquiry in American health and medicine, not least of all during the nineteenth century. Drawing on the (bio)politics of science in our contemporary moment, this webinar takes a historical approach to explore how the politicization of science is intertwined with performance, plasticity, and pseudoism. Crucially, this webinar invites us to ask: What are the afterlives of these methods in current theories of health? Who are the usual "patients" of such techniques? And most importantly, how might literary analysis help us imagine different possibilities for the politics of science?

Expecting the Unprecedented: Speculative Fiction and the Climate Events of the Future

Sewing the Seeds of Activism in an Age of COVID: The Auntie Sewing Squad

In March 2020, performance artist and comedian Kristina Wong initiated an effort with friends to sew masks for essential workers in response to the federal government’s failure to provide adequate supplies of personal protective equipment (PPE). The Auntie Sewing Squad rapidly grew into a national team of mask makers—mostly women of color—who sew masks for vulnerable and disadvantaged groups, including women’s shelters, Native American citizens living on reservations, undocumented workers, and poor communities of color. Comprised of college professors, actors, teachers, filmmakers, labor organizers, and many others, the Auntie Sewing Squad proudly “traces the lineage of this sewing to our mothers and grandmothers, immigrant and refugee communities in America, and underpaid women of color garment workers globally.” This webinar features several members of the Auntie Sewing Squad who will remark upon the group’s genesis; its place in the history of activism by, and on behalf of, communities of color; and their contributions to We Go Down Sewing, a volume focused on the activities and significance of the Auntie Sewing Squad to be published by the University of California Press in 2021.

This webinar is part of the 2020-21 CALS “Unprecedented” Webinar Series. “Unprecedented” is a word employed frequently by media, government officials, and lay persons alike to describe the phenomena surrounding the COVID-19 pandemic and its effects. Inspired by recent events and the rhetoric used to account for them, the “Unprecedented” series of one-hour webinars feature presentations and discussion by leading scholars, writers, and activists focused on better and less well-known developments in American literature and culture (and American literary and cultural studies) that might be, and in some cases have been, described as “unprecedented.”